Greetings Family! In My Line Of Work And Interests, Eye Am Always Fascinated By The Stark Contrast Between What Is Available & Kept Hidden, And What Is Revealed. Hence The Dedication Of This Site To The Slow But Steady Pulling Back Of The Veil, So That Those Who Want To Can Move Forward In Fact & Reality–Which Eye Am Finding Is Akin To The Layers Of An Onion: Just When You Thought You’ve Figured It Out, The Adventure Has Just Begun! The Inspiration For This Missive Has Come From A Thoroughly Enjoyed Sci-Fi Read:

An Unprecedented Collaboration Between Two Of The Greatest Writers In The SF Genre. Here’s Some Preview: “When a brilliant, driven scientist  and entrepreneur/industrialist harnesses the cutting edge of quantum physics and invents WormCams, wormhole opening technology that enables people everywhere, at trivial cost, to see one another at all times: around every corner, through every wall, into everyone’s most private, hidden, and even intimate moments. It amounts to the sudden and complete abolition of human privacy–forever.

Then, as society reels, the same technology proves able to look backwards in time as well. What happens next is a story only Arthur C. Clarke and Stephen Baxter could tell. The Light of Other Days is a novel that will change your view of what it is to be human.”

It Would Be A Spoiler Of The Greatest Magnitude To Go Into The Counter Culture That Develops In Resistance To This Pervasive Invasion, And All The Awesome Technological Gadgets Used By The Characters In This Book Who Inhabit The 22nd Century Earth. Luckily, We Don’t Have That Long To Wait. For Not Only Are These Advancements Possible, But Are Already Here! Yet Another Wyzedome Overview-Prepare To Download….

The human body is a composite of corrections to previous experiments that produced limited modes of physical experience. Through lessons learned, a model was conceived with the potential to evolve through multiple dimensions of experience. As the awareness changed patterns, the human body was designed to accompany that change. It was also designed so that the awareness could enter and leave a body.

In other words, the awareness was not required to cease its existence if the body was destroyed through accident or inadequate maintenance. What you call disease is inadequate maintenance. The ability to enter and leave was a known requirement, for the potential of the human body is so limitless that its capabilities of adaptation are greater than units of self-awareness can comprehend in one focus of life experience. (If You Haven’t, Do Check Out The Netflix Series “Altered Carbon”)

(Again, above paragraph exemplified in the movie AVATAR)

(Avatars left behind by the Eumelanated ancient ones of Tama-Re’/Egypt…http://www.ancient-origins.net/opinion-guest-authors/did-egyptian-mummification-descend-more-ancient-and-perhaps-reversible-020971)

It is important that the reader fully understand that the awareness is not the body, but is merely housed within the body during conscious awaking hours. It can and does sometimes leave the body during sleep, under anesthesia and traumatic periods of unconsciousness. The consciousness can become aware of this separation and can indeed train itself to leave the body intentionally. Some of those with this ability are being employed on a regular basis to intentionally visit particular people and events employing only their focused awareness/spirit, and then can and do report on these activities to those of the dark intent. Just as the physical body can be trained through gymnastics and other exacting physical sports to accomplish impressive feats, so also can the awareness be exercised and trained to do what most would consider difficult to believe.

(The foregoing info was downloaded via this film)

In this way each can begin to grasp that the “average human” on the planet is grossly unaware of its potential. The limitations of each are either self-imposed through acquired thought and belief patterns or through physical or mental limitations by genetic alteration/mutations. They are further limited by failure to maintain the physical body with proper  exercise , breathing, whole foods, and pure water. 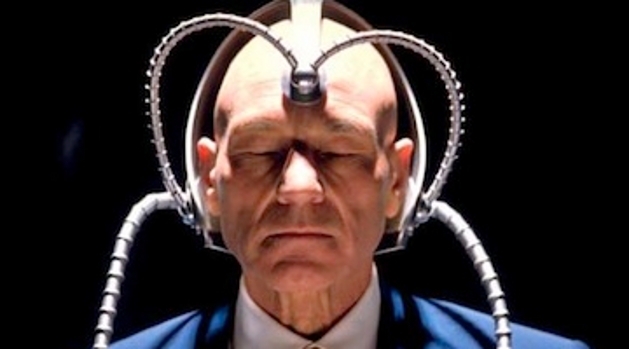 The Above Pic Is Of The Fictional Character Professor X (played by Patrick Stewart) Who Is A Powerful Telepath And Mentor/Leader Of A Band Of Superhuman Mutants Known As The X-Men. He Wears A Device Called CEREBRO Which He Built To Help Him  And His Students Locate Others Like Them. The Device Amplifies The Brain Waves Of The Wearer, Thereby Augmenting The Mental Abilities Of A Psychic Many Times Over, And Generally Requires A Certain Mastery Of The Mind Before Use. Well, As Fate Would Have It, There Is In Fact A Real Life Cerebro, And Eye Have Sat On This Data Long Enough:

An apparatus which enhances the ability of a person to perform remote viewing by connecting the human spiritual eye to the tetrahedral geometry of subspace….http://www.google.com/patents/US20060072226?utm_source=gb-gplus-sharePatent US20060072226 – Remote viewing amplifier

Try the new Google Patents, with machine-classified Google Scholar results, and Japanese and South Korean patents.
Remote viewing amplifier
US 20060072226 A1
Abstract
An apparatus which enhances the ability of a person to perform remote viewing by connecting the human spiritual eye to the tetrahedral geometry of subspace.
Images(15)

(a) a rectangular box frame made of wood having a length of six feet, a width of four feet and a height of six feet;
(b) a large sheet of quarter inch Plexiglas, having an index of refraction of 1.50, mounted on the right side of item (1a);
(c) several wedge-shaped clear plastic spacers, three inches in width and eight and a half inches in length, having a wedge angle of 30° that are mounted on the interior right side of item (1b);
(d) a shorter sheet of quarter inch Plexiglas, having a length of one and a half feet, mounted on item (1c) parallel to item (1b);
(e) a wide bench on which the remote viewer sits so that the remote viewer can align his sight along the wedge angle of item (1c);

2. A remote viewing amplifier that:

BACKGROUND OF THE INVENTION

SUMMARY OF THE INVENTION

A BRIEF DESCRIPTION OF THE DRAWINGS

DETAILED DESCRIPTION OF THE INVENTION